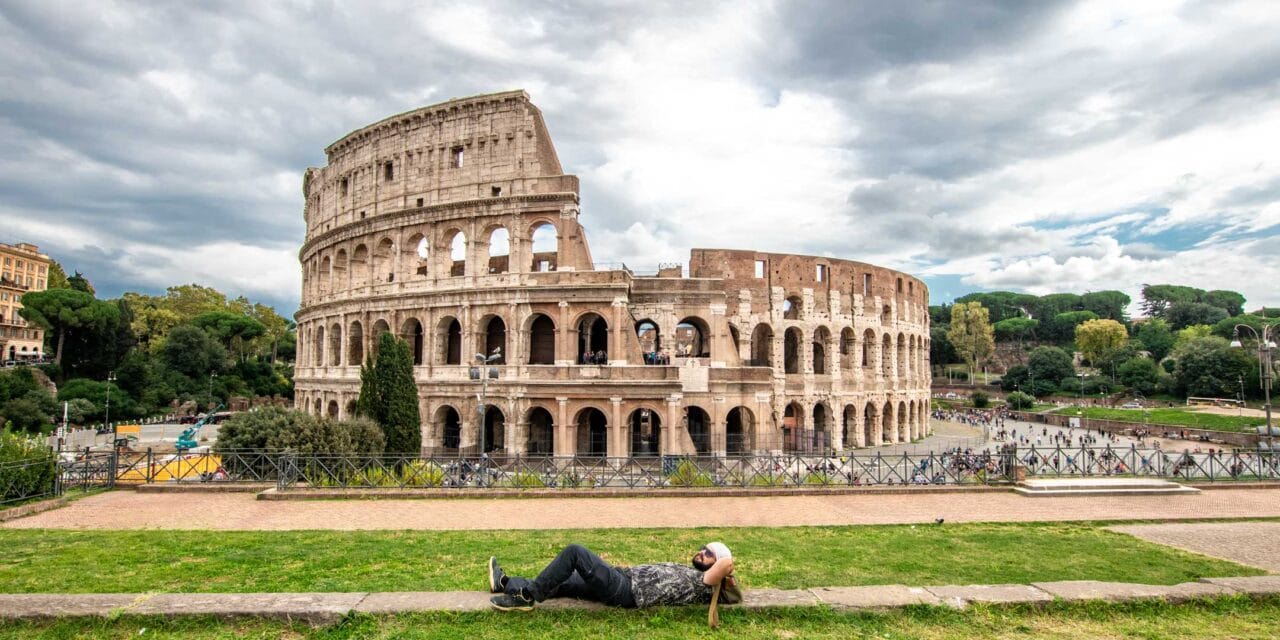 Let me start by saying this – picking the top European landmarks was hard as hell! Initially, the list was supposed to have only 15 attractions, but I couldn’t choose which one to remove, so it ended up with 20. There are so many globally – recognized landmarks in Europe that even with this extended list, I had to sacrifice some top contenders.

The ‘Old Continent’ may not have a lot of natural attractions, but the sheer amount of history and culture makes it one of the most diverse and exciting lands to explore. Get ready for world icons, stunning art masterpieces, and extraterrestrial landscapes. Those are the biggest European landmarks.

Big Ben and The Houses of Parliament, London

Let’s start with one of the most recognizable icons of Europe – Big Ben. Build in the 19th century, Big Ben overlooks London from more than 96 meters, and if you want to reach the top of it, you must be prepared to climb 334 steps.

A curious fact about the clock is that Big Ben is not the name of the whole tower but just the bell inside it. The tower’s called the Elizabeth Tower, named in 2012, to honor the Queen of England.

Big Ben is part of the Houses of Parliament, also known as the Palace of Westminster. With a history that spans over 900 years, the houses feature one of the most stunning gothic exteriors in Europe.

Castaway Fun Fact
The Palace of Westminster was built right next to the Thames River, so a mob can never surround it.

The prehistoric monument, known as Stonehenge, is one of the most mystical European landmarks. Consisting of a ring made by 25-tons stones, it’s still not determined how or why it was created.

While some scientists suggest that Stonehenge was a place of healing and ancestor worship, others believe the monument was part of a ritual passage from life to death that celebrated past ancestors and the recently deceased.

Speaking of global icons, I can’t think of anything more recognizable than this landmark. The Eiffel Tower is the symbol of Paris, France, and Europe. It’s the centerpiece of the French capital, and it’s being visited by more than 7 million people yearly. It was constructed for 1899’s World Fair to commemorate the centennial of the French Revolution and to demonstrate France’s industrial prowess.

Castaway Fun Fact
At first, Parisians were against building the tower. It was deemed ‘extremely ugly’ and ‘ruining the classic Paris skyline’.

We stay in Paris to discover our next European attraction – the biggest and most illustrious museum in the world – the Louvre. Housed in the Louver Palace, you can find everything there. From the biggest art masterpieces on the planet to ancient artifacts from long lost civilizations.

The most popular items in the Louvre are the paintings ‘Mona Lisa’ and ‘Liberty Leading the People’, the statutes ‘Venus de Milo’ and ‘The Winged Victory of Samothrace’ and the relic known as ‘Hammurabi’s Code’.

We continue our journey with yet another Parisian icon. The capital of France is such a treasure trove of landmarks.

Representing the various victories of the French army under Napoleon, Arc de Triomphe stands 50 meters tall and houses a burning flame in memory of all French soldiers who died in World War I. Built more than 200 years ago, the arc has witnessed memorable events like Napoleon’s funeral, the occupation of the Nazi’s and the WWI’s Victory Day Parade.

For the next European landmark, we travel a bit south to the only country that can rival the UK and France in terms of attractions – Italy.

And there’s no biggest symbol of Italy than Rome’s mythical Colosseum (except maybe pizza, but that’s another list). Commissioned around 70-72 AD by Emperor Vespasian, the monument was created to be a gift to the Roman people and shortly became the emblem of the Roman Empire. Also known as the Flavian Amphitheatre, the Colosseum greets more than 6 million people each year.

The Leaning Tower of Pisa

The Leaning Tower of Piza is one of the most curious attractions in Europe. This remarkable medieval structure was built over the course of 200 years and… started leaning immediately. The reason is that the tower is erected on a soft ground which can’t properly support its weight.

By 1990 the tilt had reached 5.5 degrees, so the tower had to be stabilized, reducing the inclination to 3.97 degrees. Being one of the most prominent attractions in the country, the Leaning Tower of Pisa welcomes more than 5 million tourists yearly (who make 10 million gimmicky photos).

One of my favorite landmarks on the list, the Sistine Chapel is an outstanding blend of culture, religion, and art. Located in the heart of the Vatican City, the Sistine Chapel is the papal chapel in the Vatican Palace. Constructed between 1473 and 1481 or Pope Sixtus IV, the chapel’s most prominent features are Michelangelo’s renaissance frescoes. A remarkable structure that deserves a top place on your bucket list.

The Milan Cathedral, better known as Duomo di Milano is the most impressive structure in Northern Italy and one of the most prominent landmarks in Europe. Started in 1386 by Bishop Antonio da Saluzzo, the cathedral took nearly six centuries to be finished! At least 78 different architects worked on the project. Even the famous Leonardo Da Vinci wanted to contribute but sadly withdrew his proposition.

The Duomo is the fifth-largest Catholic church in the world and features around 3,400 gothic statues and gargoyles.

Castaway Fact
From the Duomo’s roof on clear days, you can see the peaks of the Alps.

The most famous work of the immortal Antonio Gaudi, Sagrada Familia is the biggest icon of Barcelona and Spain. A curious fact about this controversial cathedral is that today, nearly a century after Gaudi’s death, it’s still not finished.

Sagrada Familia is a church like no other. The interior feature columns that stretch like tree branches toward the ceiling, while the exterior is divided into Nativity and Passion facades. The Nativity facade was built directly by Gaudi and represents the birth and childhood of Jesus Christ.

The four towers facing West make up the Passion Facade. They represent the four Apostles James, Thomas, Philip, and Bartholomew. A third facade – The Glory Facade, is still under construction, but it’s expected to be the most impressive of the three.

Mezquita-Catedral de Córdoba is a former Mosque in the Spanish city of Cordoba that was turned into a Christian cathedral in the 13th century.

Drawing visitors from all over the world, this landmark’s most prominent feature is its Hypostyle Hall. Graced by dozens of two-tiered, symmetrical red and white arches, the hall was built by recycled ancient Roman columns and offers wonderful photo ops.

Built between 1514 and 1519, Torre de Belém is the most prominent symbol of Lisbon. Representing the Golden Age or Portugal, the tower is designed in the magnificent Manueline style and overlooks the Tagus River.

Declared a UNESCO World Heritage Site in 1983, the tower welcomes more than 500,000 tourists per year.

Out of the ancient European landmarks, there’s none more famous than the Acropolis of Athens. Erected on a hill high above the city of Athens, the Acropolis has withstood all tests of time (including pillages, bombardments, and earthquakes) to let us have a glimpse into the golden era of Greece’s glorious past.

Built in the 5th century BC, the most celebrated sanctuary of ancient Athens is dedicated primarily to its patron – the goddess Athena.

Also known as Karluv Most, the most famous bridge in central Europe was created more than 500 years ago. Built by King Charles IV, the bridge used to be a vital trade route between Eastern and Western Europe. It is guarded by three towers and has a continuous alley of around thirty 18th-century Baroque statues.

Castaway Legend
A Czech urban legend tells a story of a cross mounted on Charles Bridge, where the convicts sentenced to death prayed before their demise. Although the cross was removed a long time ago, some people keep on seeing it today. It’s a bad omen and a sign of something tragic incoming.

See Also:  2 Days in Prague – All You Need to Know

One of the most iconic city sights and one of the top European landmarks, the Brandenburg Gate, symbolizes Berlin’s Cold War division into East and West – and eventually, the reunified Germany. It was constructed between 1788 and 1791 and inspired by the grand entrance of the Athen’s Acropolis.

When the Berlin Wall was erected, the gate became inaccessible for the locals. Once the wall fell, the Brandenburg Gate become the site where Germans celebrated the historic event.

Being one of the most enchanting landmarks in Europe, Neuschwanstein Castle is the epitome of castles. It was even built by a King known as the “Fairytale King” – Ludwig II. A big admirer of the composer Richard Wagner, the King constructed Neuschwanstein Castle in his honor, with many of the rooms inspired by its most colorful characters.

Tucked in the Bavarian Alps and welcoming more than 1,5 million visitors yearly, this fairytale palace with a hard-to-pronounce name is one of the world’s most visited castles.

You don’t think that all landmarks in Europe are man-made, are you? Swiss Alps offers plenty of striking mountain landscapes and peaks. The most famous of them is the tooth-shaped Matterhorn.

Standing alone on the horizon, the legendary peek has been a magnet for alpinists for years. And if you are not into adrenaline sports, just unwinding in the Swiss Alps, enjoying the Matterhorn view in the distance, is a one-of-a-kind experience.

The small island of Iceland may be home to just 350,000 people, but its wonders are countless. Black beaches, ice-caves, frozen waterfalls, and glacier lagoons grace the extraterrestrial landscape of the country, making it one of the most stunning natural landmarks in Europe and the world.

On the border of Europe, we find two of the most impressive mosques in the Islamic world – Hagia Sophia and the Blue Mosque. I couldn’t decide which one to put on the list, and since they are only a few hundred meters away from each other, I decided to bundle them together.

Hagia Sophia was completed nearly 1,500 years ago and used to be a Christian Cathedral before the Ottomans turned it into a Mosque. A UNESCO World Heritage site since 1985, today Hagia Sophia is no longer an active mosque and acts as a museum.

The Sultan Ahmed Mosque, also known as the Blue Mosque was constructed between 1609 and 1616 during the rule of Ahmed I. It’s nicknamed after the hand-painted blue tiles that adorn its interior. The design of the Blue Mosque incorporates many Byzantine elements and is considered to be the culmination of two centuries of Ottoman mosque development.

We finish our journey with the symbol of Russia. Located At the southern end of Red Square in Moscow, this architectural masterpiece was commissioned by the first Tsar of Russia – Ivan Vasilyevich – also known as Ivan the Terrible. It was built in honor of the great victory over the Tatar khanates of Kazan. St. Basil’s crazy mayhem of colors and shapes is the epitome of Russian architecture and the most impressive construction in Eastern Europe.

Castaway Legend
The legend says that Ivan the Terrible blinded the architect of the cathedral so the design could never be replicated.

Which one is your favorite?