If you often travel east, there is no doubt, you’ve used Qatar’s airport for your connecting flight. And it’s not uncommon that while chasing perfect dates or low prices, to be forced to have a boring long Doha layover.

To be honest, I enjoy the big international airports. Seeing so many different people from different cultures has always been fascinating for me, but even though Hamad Airport is one of the best airports in the world, spending more than 4 hours there feels like a massive waste of time. After all, my vacation days are limited, and I want to spend them hiking volcanos or exploring new cultures, not sitting on my ass, waiting for a flight, right?

Thankfully the Qatar Airways people have thought of that and offer you the opportunity to go around Doha, learn more about it, and still catch your plane on time. Even though Qatar’s reputation is very controversial, the chance to explore such a unique and interesting culture is not to be missed.

The airport tours are currently suspended.You can do the tour only if you stay in a Doha hotel. For more info or avialabilty, check Qatar Airway’s oficial website

There are several tour offers, but the most popular one (and also the cheapest ) is the Doha City Tour. On my last long Doha layover, I decided to check it out and see if it’s worth it.

After signing up and getting out of the airport (that may take an hour), you board an AC bus and get a bottle of water. There is also a guide provided so don’t be afraid you’d miss anything worthwhile. 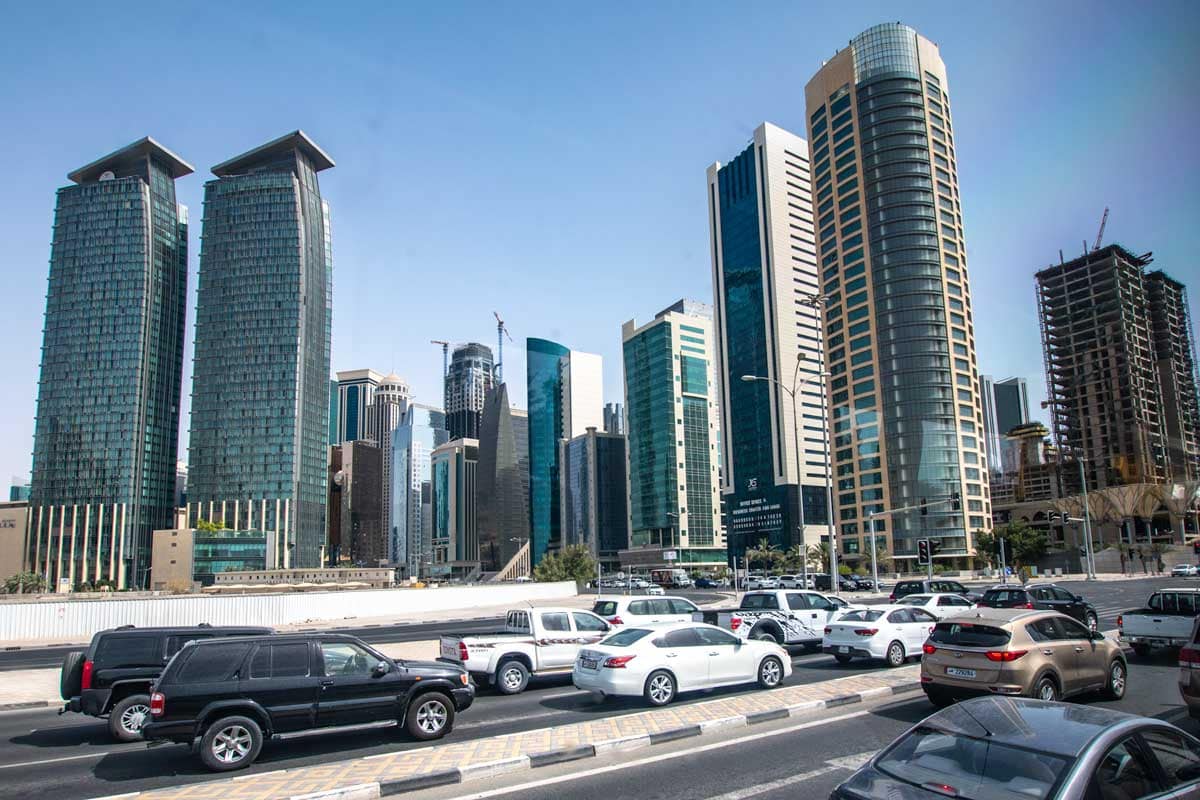 But is there anything worthwhile in Doha?

That’s a good question. And unlike other cities, there aren’t many particular landmarks that will take your breath. Most of the buildings the guide speaks about are hotels and skyscrapers. The first Hilton, the unique Four Seasons, etc. This may sound bad but is it really that bad?

While you don’t have a Colosseum or Eifel Tower to marvel at, you’d start paying attention to the city as a whole. And boy oh boy Doha really is a bizarre place with a distinctive identity.

The first thing that made me quite the impression were the lamps. The whole lamposts are covered with large Arabic words, according to my guide – quotes from the Coran. Lamposts are very important for the city’s identity, and the Doha ones do a good job reminding you that you are now in a strictly Muslim country.

In 15 minutes we reached the first stop of the Doha City Tour:

The harbor is right next to the Museum of Islamic Art, but since you have only 5 to 10 minutes per stop, you won’t be able to check it out. The highlight of the harbor is not the boats or the pearl statue on the entrance, but the magnificent panoramic view of the city.

And while 5 minutes may seem too little time to enjoy, I found it to be just enough to take some photos and enjoy the sight before getting too hot ( TIL: The whole country of Qatar is built in the desert ).

For our next stop, we went into downtown Doha, so I had the chance to observe more of the daily life of Qatar’s capital. The first thing that struck me as a weird one was the lack of color. Most of the buildings were painted in desert yellowish while 90% of the cars were either black or white.

Stop number 2 of my Doha layover trip was the Katara Cultural Village. With the idea to position the State of Qatar as a cultural beacon a lighthouse of art, radiating in the Middle East through theatre, literature, music, visual art, conventions, and exhibitions, it did sound like an exciting place to see.

Sadly we didn’t have the time to check any art exhibition but the walk around the oddly fascinating art and mosques were enough to convince me this is a place I should come back to.

Making our way to the third stop, we kept seeing more and more of the city, and I realized that the only people I see outside were immigrants working on construction sites.

It was Thursday morning, and in any other major city the streets would’ve been buzzing with people going to work, but Doha was empty. I guess Qataris didn’t bother going early to work. Such a different world.

See Also:  How to Spend 10 Days in Morocco

The third stop of the Doha City Tour was an artificial island called The Pearl. You probably didn’t know ( I certainly didn’t), but before the oil boom, Qatar was one of the significant pearl traders of Asia.

To honor their heritage, the Qatari people (or more like the Qatari sheik) decided to build an artificial island that resembles the shape of a string of pearls, right on top of a former pearl diving site (who need pearls when you have oil, right?).

Spanning nearly four million square meters, it is also the first land in Qatar to be available for freehold ownership by foreign nationals.

Besides the security, there were no people around. Not even a single one. You see, I come from a small country, I’m used to not having tons of people around me, but still, having absolutely no one, was a strange feeling that made me watch behind my back more than once, expecting to see some zombies. The dozens of luxury boats and skyscrapers made a good photo background though.

On our way to the last stop, we passed through some diplomatic neighborhoods and were asked not to take pictures. The guide explained all diplomats and Qatari people value their privacy, so they build big walls around their houses. Man, they’re gonna have a tough time during the Fifa World Cup in 2022. 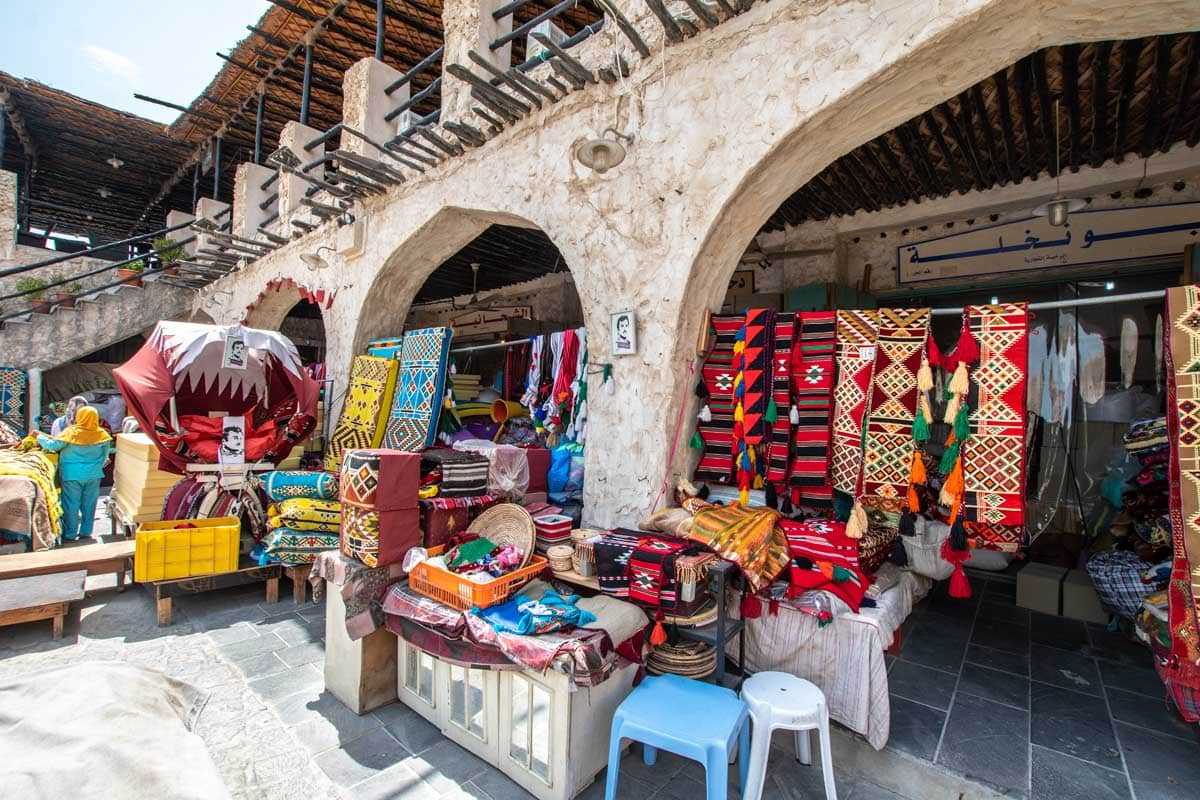 The last stop of my Doha layover trip was Souq Waqif market. We were given a whole 30 minutes to explore it and buy some stuff (not that any of us got any Qatari money). The market was quite pleasant, and there were some real people there!

It was built in the traditional Arabic way and sold all kinds of stuff from souvenirs and clothing to animals and spices. Unlike the other Arabic bazaars, there weren’t annoying hawkers trying to hijack you into their shop, which made walking around Souq Waqif relaxing and enjoyable.

After a delightful 30-40 minutes (a Chinese guy got lost, so we had to wait for him) we were back on the bus and on our way back to the airport.

The Discover Qatar Tours desk is located right on the start of Concourse B. When you make your way from the giant yellow bear, look to your right. It’s between the Mont Blanc and WH Smith shops. You can also book a tour online.

While lacking any real attractions and having only 5-10 minutes per stop, I’m happy I took the Doha City Tour. Having this extra journey within my journey, showed me such a different culture that awoke my curiosity about Qatar and its people big time.
One thing is for sure though – this long Doha layover was the most interesting one I’ve had by a longshot!

What did you do on your long Doha layover?

Hello, Used to be only on the desk. Tthe tour was stopped for a long time due to Covid and I'm not sure if it's even an option right now (or will be in August) or what the new conditions.

I am going to Doha on 3 Apr from Sabiha arriving 230pm I plan to have city tours and dhow boat cruise Is there enough time for camel tide? My next flight to Kuala Lumpur is on 4 April 2.00am early morning Please advise as soon as possible

You better check this with some tour providers. Some of them may offer an afternoon tour with a return trip to the airport.

I have experienced the city tour a few years ago and need help figuring out where one of my photos were taken. Is there someone who can help me with the name? I could not find it in the city tour pictures but know I was there around the Souq Waqif Market

I like the way you have detailed this article. I was in Doha last month but i did not manage to go for the bus tour due to flight timings. Next time am transiting in Doha, i will make sure i take a flight with a long layover.

Doha's airport is the only one I'd deliberately plan a long layover too. They have some desert tours I want to try next time.